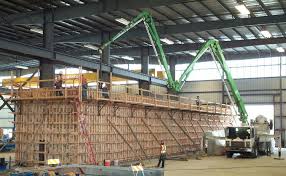 About 150 employees at Parsons Manufacturing Co. in Illinois were shocked to see their company’s building turned into a pile of mangled steel beams and other rubble as an F-4 tornado ripped through the area. But what’s even more shocking is that they were inside the building when the storm hit.

Thanks to reinforced concrete masonry shelters, all 150 people walked away from the disaster without a scratch. An F-4 tornado has wind speeds from 207 to 260 mph.

Winds from the storm leveled the 225,000-square-foot plant and destroyed at least half a dozen homes nearby.

“We were told over a public address system to head to the three restrooms, which are made of reinforced concrete masonry and serve as storm shelters. When we got to the shelters, we could see steel beams and machinery flying in the air,” recalled DavecClallen, a Parsons employee.

Bob Parsons, owner of Parsons Manufacturing, which makes parts for the construction and mining industries, didn’t want to take any chances when constructing his operation after a near miss of his first business by a tornado in 1972. When he built an expanded business across the street, he included reinforced concrete masonry storm shelters inside. He said that he never could have guessed that decision would save 150 lives 30 years later.

“The storm shelters were so important. They saved all of our lives,” said Craig Joraanstad, the company’s human resources manager. “The most important thing

“Researchers at the Wind Science and Engineering Research Center at Texas Tech University demonstrated this fact at a wind projectile test in September 2003,” Graber said. “In that test, solid grouted 8- and 6-inch reinforced concrete masonry wall panels withstood the standardized FEMA [Federal Emergency Management Agency] test of 15-pound, 2 by 4 projectiles shot at 100 mph, which is representative of debris in a 250-mph tornado.”